Here we go. The bellicose rumblings of a hungry superpower. 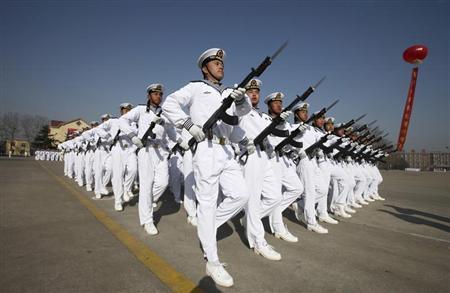 BEIJING (Reuters) – China’s state media warned on Saturday that a “counterstrike” against the Philippines was inevitable if it continues to provoke Beijing in the South China Sea, potentially Asia’s biggest military troublespot.

The warning comes as ministers from both countries attend an Association of Southeast Asian Nations meeting in Brunei, starting Saturday, which hopes to reach a legally binding code of conduct to manage maritime conduct in disputed areas.

Both China and the Philippines have been locked in a decades-old territorial squabble over the South China Sea, with tensions flaring after the Philippines moved new soldiers and supplies last week to a disputed coral reef, prompting Beijing to condemn Manila’s “illegal occupation”.

The overseas edition of the People’s Daily, the official newspaper of the Chinese Communist Party, said in a front-page commentary that the Philippines had committed “seven sins” in the South China Sea.

These include the “illegal occupation” of the Spratly Islands, inviting foreign capital to engage in oil and gas development in the disputed waters and promoting the “internationalization” of the waters, said the commentary.

The Philippines has called on the United States to act as a “patron”, while ASEAN has become an “accomplice,” said the commentary, which does not amount to official policy but can reflect the government’s thinking.

“The Philippines, knowing that it’s weak, believes that ‘a crying child will have milk to drink’,” the People’s Daily said, accusing Manila of resorting to many “unscrupulous” tricks in the disputed waters.

Beijing’s assertion of sovereignty over a vast stretch of the South China Sea has set it directly against Vietnam and the Philippines, while Brunei, Taiwan and Malaysia also lay claim to other parts of the sea.

The 10-member ASEAN hopes to reach a legally binding Code of Conduct to manage maritime conduct in disputed areas. For now a watered-down “Declaration of Conduct” is in place.

On Thursday, China’s Foreign Minister Wang Yi warned that countries with territorial claims in the South China Sea that look for help from third parties will find their efforts “futile”, adding that the path of confrontation would be “doomed”.

Last week, China vowed to protect its sovereignty over the Second Thomas Shoal, known in China as the Ren’ai reef. The Philippines is accusing China of encroachment after three Chinese ships, including a naval frigate, converged just five nautical miles (nine km) from an old transport ship that Manila ran aground on a reef in 1999 to mark its territory.

Last year, China and the Philippines were locked in a tense two-month standoff at the Scarborough Shoal, which is only about 124 nautical miles off the Philippine coast. Chinese ships now control the shoal, often chasing away Filipino fishermen.