German submarines at sea “on this day in history” 22 June during the Battle of the Atlantic. 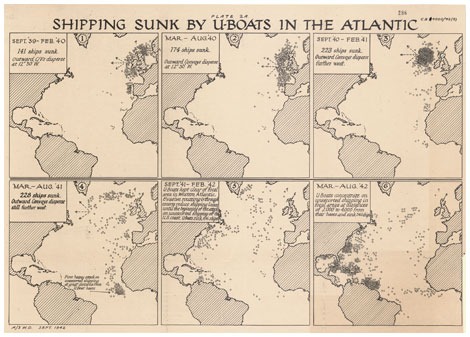 The two U-Boats still at sea in 1945, more than six weeks after the official German surrender, were U-530 and U-977, both on their way to Argentina.

The Great Western Riding a Tidal Wave, 11 December 1844. Painting by Joseph Walter in collection of National Maritime Museum, Greenwich (via BBC Your Paintings).

A portrait of the wooden paddle steamer ‘The Great Western’. Built by Brunel, she was the first of his three steamships and pioneered the steam deep water passenger trade. She was launched at Patterson & Mercer’s yard in Bristol on 19 July 1837 and sailed to London later that month to be fitted out.

The ‘Great Western’ sailed from Bristol on her maiden voyage on 8 April 1838, arriving at New York on 23 April. She completed 45 Atlantic voyages to New York for her original owners, the Great Western Steamship Company, before being sold to the Royal Mail Steam Packet Company for its service between Britain and the West Indies. The sale was forced in order to raise funds to salvage the company’s other ship, the ‘Great Britain’ (1843), from Dundrum Bay. Following service to the West Indies, the ‘Great Western’ was employed as a troop transport during the Crimean War. She was broken up at Castle’s Yard on the Thames in August 1856.

The painting is signed ‘J Walter’, and is a smaller version of a painting in the Bristol City Art Gallery and Museum.