INDIAN OCEAN: On 6 November, a merchant vessel reported a pirate attack near position 05:40 S – 046:59 E, approximately 450 nm east-southeast of Mombasa, Kenya. The ship reported being attacked by five heavily armed pirates in one skiff, with the pirates reportedly exchanging gunfire with the ship’s embarked security team. The alarm was raised as the attack started, and the ship increased speed, activated the fire pumps, and started evasive maneuvers. The pirates reportedly moved away from the ship after the embarked security team returned gunfire.

INDIAN OCEAN: On 5 November, FGS NIEDERSACHSEN interdicted a pirate attack off Somalia. The PAG reportedly consisted of one whaler and skiff. There
were ten suspected pirates sighted in the boats along with numerous large fuel barrels. Upon closer surveillance, personnel in the boats were reportedly seen throwing two long ladders overboard before heading back to the beach.

INDONESIA: On 4 November, an anchored chemical tanker experienced an attempted boarding near position 03:54 N – 098:46 E, Belawan Anchorage. Duty crew spotted one boat with robbers attempting to board the tanker via anchor chain but alert crew thwarted the boarding. A second boat was hidden near the propeller and the crew could not chase them away with fire hoses. The propeller was turned on resulting in the robbers moving away. The robbers were spotted with some stolen hull anodes in their boat. Port Control informed of the incident.

INDIA: On 2 November, an anchored container ship experienced a boarding near position 21:40 N – 088:01 E, Sagar Anchorage. 15 armed robbers boarded the ship and were spotted by ship’s duty officer, who raised the alarm. The robbers were stealing ship’s stores and jumped overboard when the alarm was raised.

Five years each, less time served. Huh. I’m old enough to remember when “piracy with violence” was punishable by death under the Piracy Act (1837). 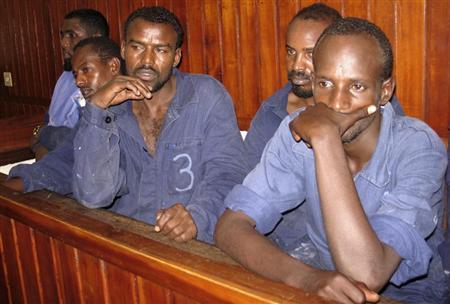 (Reuters) – A Kenyan court in the coastal city of Mombasa sentenced nine Somalis on Tuesday to five years in prison each for attempting to hijack the German merchant vessel MV Courier in the Gulf of Aden in March 2009.

The men were arrested by international anti-piracy forces before being handed over to Kenya to be prosecuted, as Somalia was not considered able to try them properly.

Although the number of attacks has fallen markedly since 2011 thanks to tougher security aboard ships and increased Western naval patrols, piracy emanating from the Horn of Africa nation may still cost the world economy about $18 billion a year, the World Bank said in April.

Prosecutors told the court the men attacked the ship armed with a rocket launcher, an AK-47 rifle, a pistol, a SAR80 carbine rifle, and other weapons.

“The suspects used violence to hijack the vessel, and took control of it, putting in fear the lives of those aboard,” prosecutors said in the charge sheet. Kenyan officials said 18 crew on board survived the ordeal.

The nine suspects were held in custody at one of Kenya’s maximum security prisons during the trial period. They all denied the accusations.

While handing out the sentence, the court noted that the accused had already served a long term in jail while the trial was in progress, and therefore were given shorter jail terms.

“I am satisfied with the evidence presented by the prosecution, which proves beyond reasonable doubt that an act of piracy was committed,” judge Stephen Riech said.

Riech ordered the nine to be deported to Somalia after serving their sentences.

Last month another nine Somalis were handed a similar sentence at the same court, after also being found guilty of hijacking a ship in the Gulf of Aden in 2010.

Judith and David Tebbutt were on holiday in Kenya when they were attacked by a group of armed men. David was murdered and Judith was taken to Somalia where she was held hostage for six months. Just over a year after being freed, she describes her extraordinary determination to survive.

You meet Judith Tebbutt – she likes to be called Jude – and you wonder how, after six months in a filthy, cramped room, on starvation rations of potato and rice, insulted, humiliated and occasionally threatened with summary execution, she could appear so untouched and so resilient.

She was determined to survive, and that’s her motivation for writing a book about her experience, A Long Walk Home, and for speaking to the BBC in one of her only interviews about the ordeal.

Jude, from Bishop’s Stortford, Hertfordshire, wants to be an encouragement and example to others held for ransom.

“That is the message,” she says. “This is for any hostages, throughout the world, especially in Somalia, because I know the conditions they’re going through, not to give up hope. Hope is my saviour.”

Jude’s nightmare began during what, at first, was a dream holiday with her husband of more than 30 years, David, who was finance director at the publisher Faber and Faber. They had met in Africa, and David loved it there.

In September 2011, after a week spent on safari in Kenya’s Masai Mara game reserve, they arrived at the Kiwayu Beach Resort – on an island in Kenya’s Lamu archipelago, but only 40 km (25 miles) from the coast of Somalia.

Jude was uncomfortable from the start.

“It felt wrong,” she says. “It was completely quiet. When I was told there was nobody there except us, that felt really strange.

“The room we were in was so far away from the rest of the building. But David said ‘Don’t worry, this will be our Robinson Crusoe experience.'”

But on that first night, she was awoken by the sounds of David struggling with someone in the dark. Then she was jabbed with the barrel of a rifle and dragged down to the beach.

Barefoot and in her pyjamas, she was manhandled into a boat, thrown on top of fuel cans, and the boat sped out to sea.

“I hit my head, which cut my eyebrow. My mind was racing… trying to make sense of this terrifying experience,” she says.

It’s clear, though, that even from those first shocking moments, Jude, was calculating how she could get some control over the situation. She would smile at her captors, for example – as a way of building a basic level of rapport.

Jude, who had worked as a mental health social worker, believed she needed to engage with the pirates as much as possible.

As her captivity extended into weeks, she taught herself some Somali so she could say “please” and “thank you” and make them see her as a human being – not just a commodity to be sold.

“Even though I despised these people, I knew that if I was going to be in their company for any length of time, I needed to try and build a rapport with them, build a connection.”

There were other small victories, like refusing to wear full Somali dress.

“They were trying to get me to dress in the full hijab, jilbab, everything. I put this on, and one of the pirates said ‘Ahh, beauty! Beauty Somali woman!’

“I’m not a Somali woman, and I didn’t want to be a Somali woman – so I took it off straight away. I felt suffocated covered in all these robes, and completely alien.

“That’s really important, not to lose your own identity. However cruel they are to you, however they degrade you, you must remind yourself of who you are, all the time. I was still Jude, and I wanted to come out as Jude. I wanted to find a life for Jude again.”

And there was the walking. Confined in a hot, dirty room, Jude was determined to keep herself as fit as possible. So she devised a timetable of exercises – walking half-an-hour in each daylight hour.

She did pilates too – much to the confusion of her captors.

The room where Jude was kept for much of her confinement

She kept up her exercise schedule while she was strong enough – but the poor diet made her too weak by the end of her imprisonment.

Negotiations for her release began within a few days of her arrival in the village where she was to be kept. A few weeks in, her son Ollie was able to reach her on the pirate negotiator’s phone.

Jude had convinced herself that David had survived and he was out there working for her release.

“But Ollie said ‘There’s something I must tell you about Dad. He didn’t survive his injuries…’ I said, ‘What are you telling me, are you telling me that Dad’s dead?’ Then I heard the negotiator’s voice: ‘Three minutes is up.’

The beachside resort where Judith Tebbutt and her husband were kidnapped

“One by one, they just filtered out. I was left with the leader man, and I said ‘It was you. You killed my husband!’ and it was like this face off. I thought ‘I’m just going to look at you until you turn your face away.’ I just felt such hatred.”

Eventually, he slunk away.

Throughout her captivity, she tried to gather evidence about her captors – making detailed descriptions of them and trying to gather their DNA when they touched her torch, or her notebook – hoping that one day they would be caught and be held accountable.

But she says she does not want her kidnappers dead. And she doesn’t want to be consumed by the desire for revenge. “I don’t want them to have that power over me. They are only in my head when I want them to be.”

After a few weeks, the pirates allowed Jude a radio, and she listened to the BBC World Service – including some programmes broadcast from Somaliland.

“I was sitting in a very dark room listening to you. You have no idea what that means to me, you really don’t!

“You interviewed one young woman whose family had gone back to Somaliland from Hertfordshire [in the UK], who was interested and dedicated to making Somaliland better. That needs to happen to the whole of Somalia.”

And Jude has a message to others held hostage in Somalia and around the world. “I just really want to tell people ‘Do not give up hope, you haven’t been forgotten’.

“You may think that you’re languishing but there’ll be someone somewhere trying to work towards your release.”