The orders to enter neutral Norwegian waters had been approved personally by the First Lord of the Admiralty, Winston Churchill. If Capt. Vian was unable to secure the cooperation of the Norwegian authorities to search the Altmark – which herself was in violation of Norwegian neutrality – then he was ordered to board the Nazi vessel regardless, as a copy of the Admiralty signal to Vian shows: 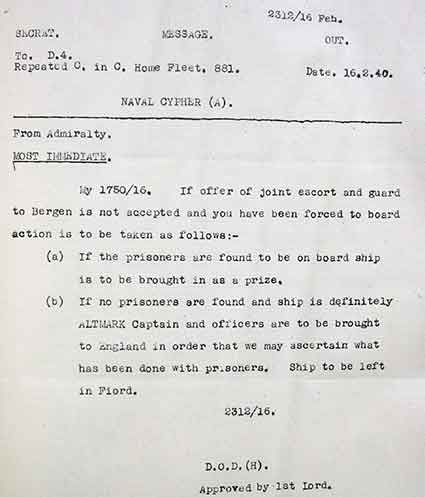 The official Norwegian inspection of Altmark when she entered territorial waters had, on three separate occasions, failed to discover the 299 prisoners held in the ship’s hold. How thorough were these inspections? To what extent was Adm. Carsten Tank-Nielsen complicit in letting the German’s continue their deception? Where the Norwegians attempting to curry favour Germany? These are questions worthy of debate at another time.

Vian was unable to secure the co-operation of the Norwegian authorities, beyond yet another assurance that the were no prisoners held on the Altmark. At 22:20 on the night of 16th February 1940, Vian brought HMS Cossack alongside the Altmark and sent a boarding party. After a bloody struggle, the armed German guards were overpowered and the prisoners were located.

The boarding party from HMS Cossack tackled the Altmark’s German guards in hand-to-hand fighting with fixed bayonets and cutlasses. It was the last recorded use of the cutlass in a boarding action by the Royal Navy.

Concluding the action, Capt. Vian signalled the Admiralty with news of his success, as this copy of his signal shows:

Capt. Vian’s signal to the Admiralty sent on the morning of 17 February 1940.

HMS Cossack left Jøssingfjord unmolested by Norwegian ships, although official protests were lodged through diplomatic channels. She arrived at Leith where she landed the rescued merchant seamen. Vian was awarded the DSO for his actions on the night of 16th/17th February and the phrase, “The Navy’s here!” would enter the history books.