The USS Wasp (LHD-1) is the lead vessel in her class of amphibious assault ships. Commissioned into the US Navy in 1989, the Wasp was the first ship to carry the V-22 Osprey and is currently the Navy and Marine Corps platform for testing the F-35B STOVL (replacement for the AV-8B Harrier II).

Having a “spare” flattop to use for operational conversion is a clear sign that you are a superpower. Many navies cannot muster a single aircraft carrier, helicopter carrier or assault ship. This is not a problem that the US Navy faces.

Capt. Brian Teets relieved Capt. Gary Boardman as the commanding officer of Wasp in a time honored ceremony held in the hangar bay.

“I would like to thank the crew for their outstanding hard work and dedication throughout my time as commanding officer of Wasp,” said Boardman. “We had a very demanding schedule over the past couple of years, but I was continually impressed by the teamwork and ‘can-do’ attitude displayed by all. This crew has made some real impacts to our nation’s defense and should be very proud of their selfless service.”

Under Boardman’s command, Wasp earned the Battle “E” after participating in exercises and events during 2012 which include: Bold Alligator 2012, Fleet Ex 2012, Defense Support of Civil Authorities after Hurricane Sandy, and Fleet Weeks in New Orleans, Port Everglades, Fla., New York, and Boston. During Boardman’s time aboard Wasp, the ship conducted the first at sea launch and recovery of the highly anticipated F-35B Lightning II Joint Strike Fighter (JSF).

Boardman will next serve as the chief of staff for Expeditionary Strike Group 2 in Virginia Beach, Va.

Under Teets’ command, Wasp will continue to operate as the test platform for JSF.

“I am extremely honored and humbled to serve as the next commanding officer of this great warship. I would like to thank the officers and crew of Wasp for their continued hard work and commitment,” said Teets. “Because of this outstanding crew, I am confident Wasp’s legacy of excellence will continue as we return her to the combat deployment rotation.”

Teets, a native of Urbana, Ohio, received his commission March 1990 through the Naval Reserve Officer Training Corps program at Ohio State University, where he earned a Bachelor of Science degree in Production and Operations Management. His previous assignments include Helicopter Anti-Submarine Squadron Light (HSL) 44, HSL-4, HSL-37, and USS Enterprise (CVN 65). Teets reported to Wasp in December 2011 as the executive officer.

Wasp is scheduled to begin a maintenance period while in dry dock this fall after completing an underway for JSF testing.

Another step towards completion for the first of the Royal Navy’s new class of aircraft carriers as the aft island of HMS Queen Elizabeth is lifted into place. The carriers will carry a mixed air wing comprising the F-35B joint strike fighter and Merlin helicopters.

If you want to know what the biggest warship Britain has ever built will look like, take a trip to Rosyth in Scotland, for today HMS Queen Elizabeth is almost complete.

The iconic aft superstructure of the Royal Navy’s next-generation aircraft carrier was today fixed firmly on her flight deck – all but completing the look of HMS Queen Elizabeth. The 753-tonne structure, which serves as the air traffic control centre for the 65,000-tonne warship, was lowered into place following a delicate all-night operation.

The carrier’s aft island stands proud on her flight deck after an all-night precision operation to first lift it, then fix the 753-tonne structure on to the deck.

It means the two iconic pieces of carrier superstructure – the ship is the first to feature the innovative two island design – are now firmly in place; the forward island, a few metres ahead, has been on the flight deck since April.

That is home to the ship’s bridge among other compartments.

The aft structure is home to Flyco – Flying Control, effectively the carrier’s equivalent of an airport control tower.

It took engineers and shipwrights at BAE Systems Scotstoun works – one of half a dozen yards around the UK building sections of the carrier – 90 weeks to complete.

The island was ferried around Scotland on an ocean-going barge last week, before arriving at the Babcock yard in Rosyth to join the rest of the ship in the specially-extended dry dock which is home to the 65,000-tonne carrier.

“Moving this section is a momentous occasion for the carrier programme,” said Ian Booth of the Aircraft Carrier Alliance, which is overseeing the massive project.

“Queen Elizabeth now has a completely unique and distinctive profile and, thanks to the dedication of thousands of workers she will be structurally complete by the end of the year.”

The team from the Aircraft Carrier Alliance invited all the major media players to witness the gigantic structure being lowered into place with millimetric accuracy, billing the occasion as ‘the creation of a carrier’.

“This is a very significant moment in the making of the ship, particularly as she’s an aircraft carrier, because the guys working in the aft island will be operating and controlling all of the aviation activity on this flight deck,” Queen Elizabeth’s Senior Naval Officer Capt Simon Petitt told those present at the lifting ceremony.

“Once we’re fully operational, we will be flying helicopters and jets from all three Services to use the power of the air and the freedom of the ocean to influence those on the land – and that’s the advantage of an aircraft carrier.”

At 10.10am precisely, to the cacophony of apprentices sounding air horns, they saw just that as the island settled on the flight deck, sealing a plaque featuring the insignia of the Royal Navy, Royal Air Force and British Army beneath it.

For although she flies the White Ensign, Queen Elizabeth – and her sister Prince of Wales – are national assets, for use by all three Services.

The F35 Lightning II jets which will be her primary punch will be flown by the Fleet Air Arm and RAF. But her deck will also be used by Army Apaches and troop-carrying Chinooks and Merlins ferrying soldiers and Royal Marines into battle.

“HMS Queen Elizabeth will be at the centre of the UK’s defence capability for 50 years,” said Rear Admiral Steve Brunton, Director of Ship Acquisition.

“She will be absolutely unique and, combined with assets across the rest of the UK’s Armed Forces, will provide the country with an unprecedented level of capability, protecting the UK’s interests and providing humanitarian support across the globe.”

That’s a good five years in the future. For now there remains a lot of work to do to complete Queen Elizabeth internally and externally.

Although all sections of the ship have been delivered to Rosyth, not all have been attached – most notably her ‘ski ramp’ which will help the F35s into the air as the same structure did for Harriers on the Invincible class of carriers.

It will be attached later this year.

Compartments inside are being ‘signed off’ (ie completed) every week and work will soon begin to give Queen Elizabeth a Royal Navy livery instead of the ship’s mostly crimson paint scheme at present.

In a few weeks’ time, the team from the Aircraft Carrier Alliance will begin to give the carrier her battleship grey appearance; right now she’s a mish-mash of colours, with the flight deck a very un-RN-like crimson.

The F-35B STOVL will form the backbone of the Royal Navy (Fleet Air Arm) and Royal Air Force joint strike force, based at RAF Marham and operational aboard the new Queen Elizabeth-class aircraft carriers. 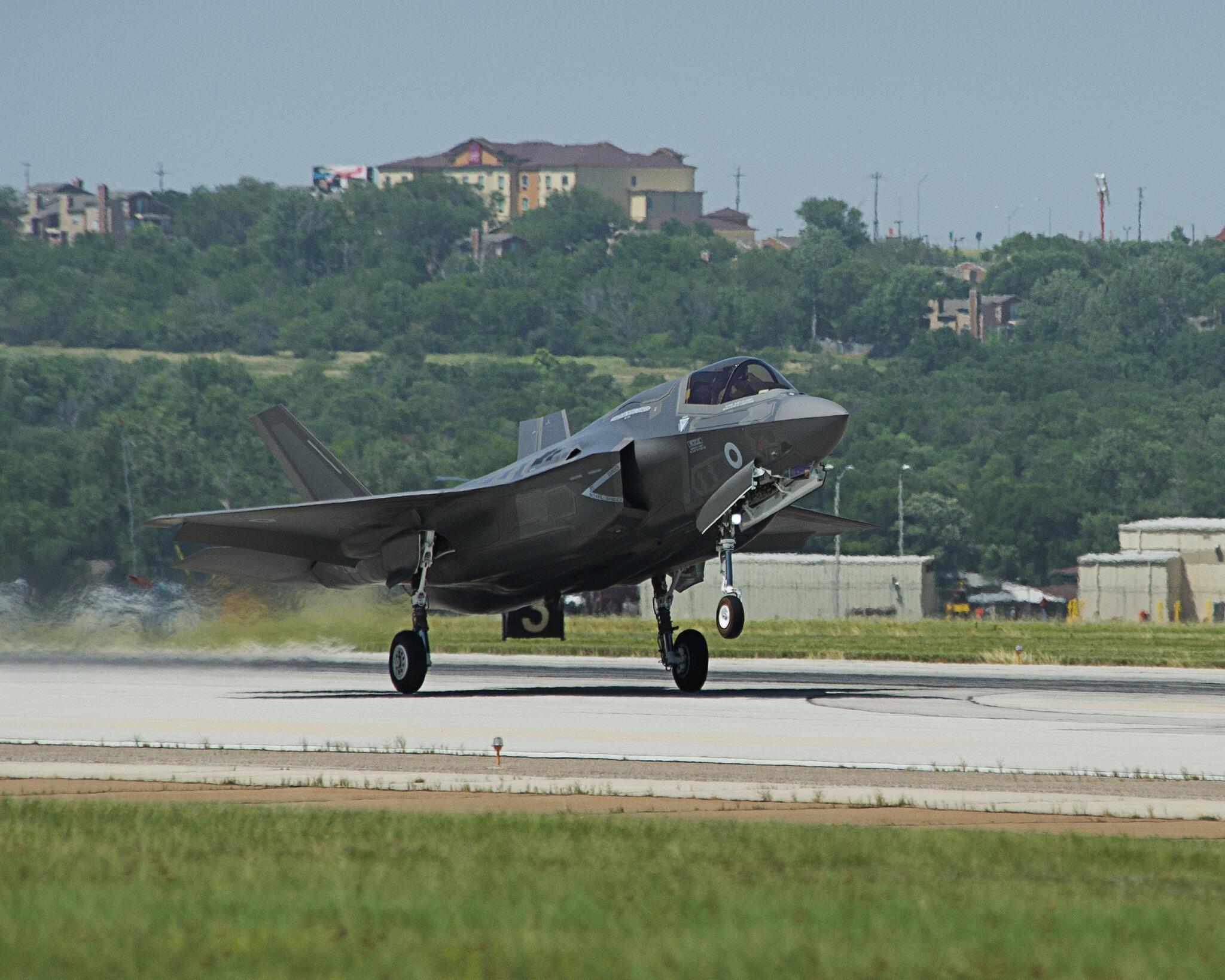 The third of the UK’s F-35 Lightning II fighter aircraft has arrived at Eglin Air Force Base, Florida.